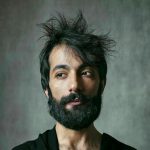 I was born in 1986 in the southern Iranian city, Shiraz. I studied Architecture in Shiraz University and graduated in 2010. During my college years I developed a serious interest in calligraphy, a rather traditional art of my country and have pursued my explorations in that field to this minute. I considered Art to be generally especially game through which the personal, the local and the universal come to play. Providing a space to question and redefine that conversion – become – time that is sense-making.